When seasoned fries meet gravy and cheese curds, Poutine is born. This easy Poutine Recipe is drizzled with homemade Poutine Gravy and cheddar cheese curds. A comfort food gift from Canada. Learn how to make Poutine, a Canadian classic.

When trying a restaurant for the first time I usually ask the waitstaff for menu recommendations. A new-to-me restaurant in Provo, Utah called Station 22 serves a promising dish of fries and gravy. When the server recommended Poutine, I was intrigued. I suppose if I was from the upper Midwest or Canada, I would have known exactly what I was getting.

The dish was served piping hot and and using my fork I grabbed one of the french fries. The melted cheese was stringy and inviting. The combination of the light colored gravy, melted cheese and cheese curds was perfect. My daughter and I split this serving and finished every last fry and curd. I almost licked the plate, we were in the corner, I don’t think anyone would have noticed. Since then I have been meaning to re-create this dish. Today I am sharing my Canadian-American Poutine recipe with you.

According to Wikipedia, Poutine is a dish consisting of french fries, cheese curds and brown gravy. Many people claim to have invented this dish but the general consensus is that it came about in the early 1950’s.

Poutine gravy is usually made starting with a roux and then adding beef stock or chicken stock to make a somewhat thin golden brown gravy that will drip down to the bottom of the pile of fries. A roux is simply fat and all purpose flour cooked until a nutty aroma develops and is the basis for gravy, sauces and as a thickener for soups.

Cheddar cheese curds are traditionally served on top of the fries before you pour the gravy over and of course, you will want to serve immediately as the gravy will make the fries soften.

Frozen french fries are actually better than any I have made homemade so I used frozen seasoned fries and was glad I did. This shortcut made this dish very easy to make. If you do decide to make your own, russet potatoes are the best for fries, in my honest opinion.

For the gravy I wanted to replicate the recipe from Station 22 so I opted to add milk to the roux instead of beef or chicken broth. First I sautéed some shallots in bacon fat until soft then added a clove of garlic, minced.

After adding more bacon fat, I then added the flour and cooked it until it turned a golden brown color. While slowly stirring, I added the milk, salt, pepper and Worchestershire sauce. It simmered until it developed the desired thickness.

When serving, I added mozzarella and cheese curds before pouring the gravy over and ate it immediately. Mozzarella cheese is not in the original version of Poutine but it is currently popular to add it for the melted cheese affect.

The cheese curds don’t melt but are super tasty and fun to eat. Some versions include shredded cheddar instead of mozzarella. In New Jersey and New York they skip the cheese curds and just use shredded mozzarella or cheddar, naming them Disco Fries.

I don’t know how you feel about this decadent junk food but when it’s below zero in January in Northern Utah, I will be cuddling up to a large bowl of some homemade easy Poutine. I love Poutine and I would like to personally thank our Canadian neighbors for this soul-feeding comfort food. 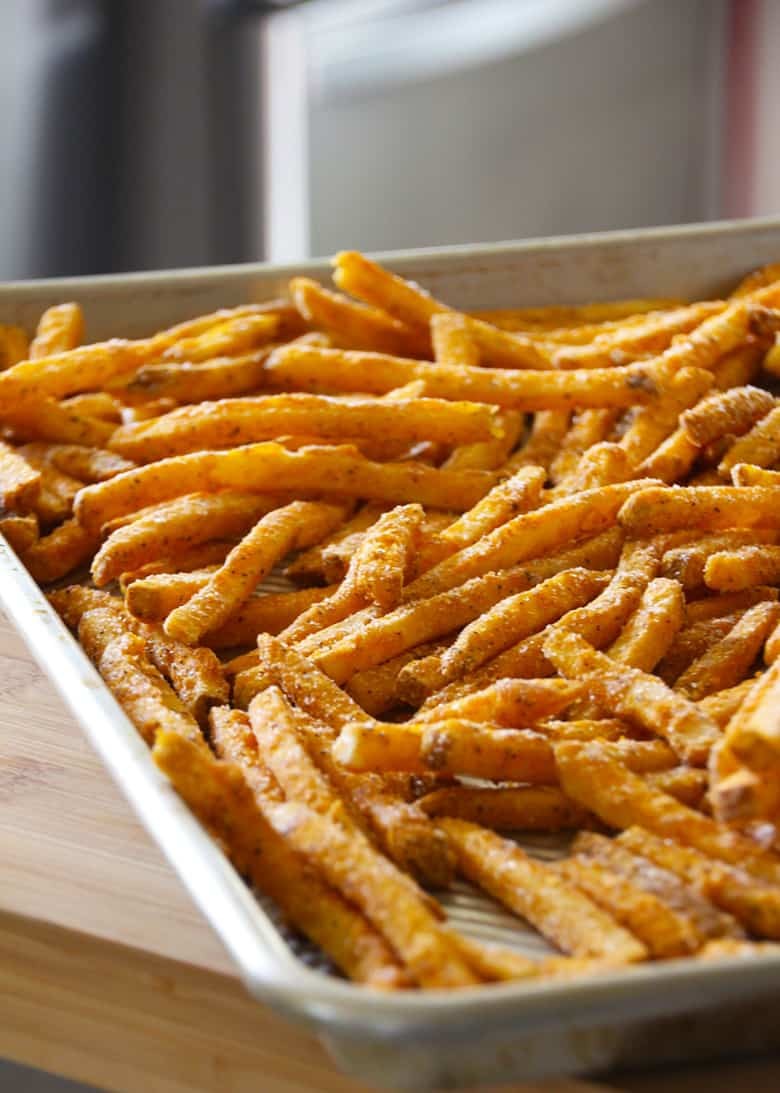 Layer fries on a baking sheet in a single layer. 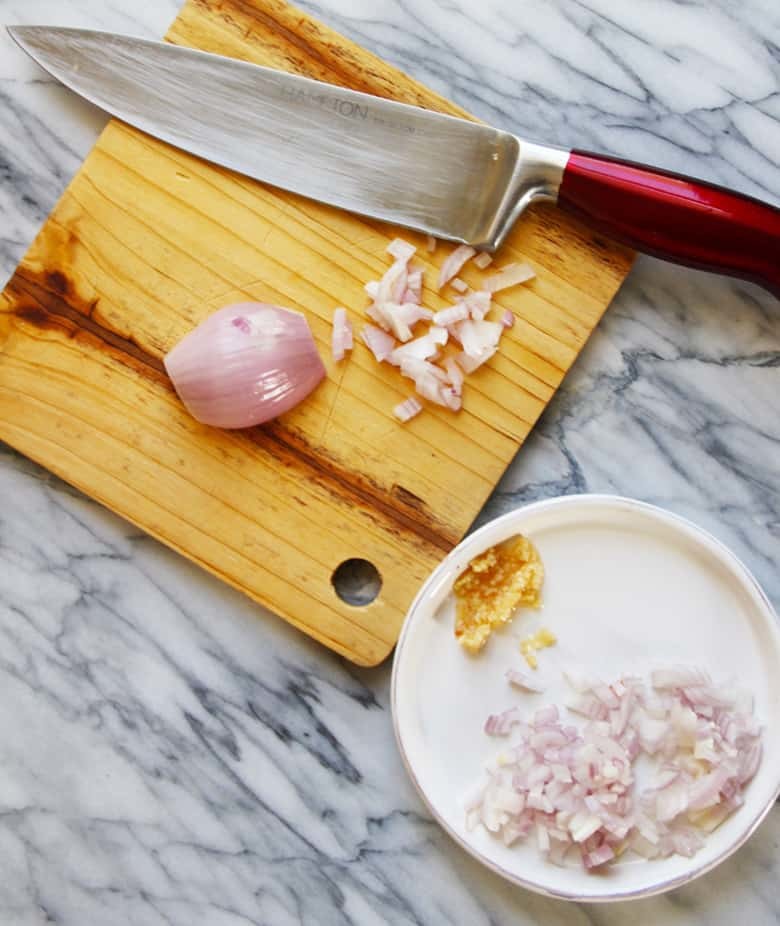 While the oven is pre-heating, dice up a shallot and clove of garlic. 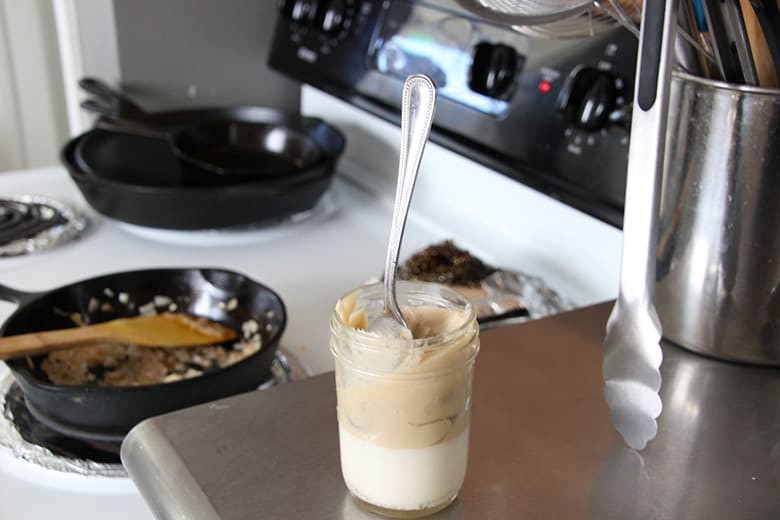 Add bacon fat to a small skillet or sauce pan and heat over medium-low. 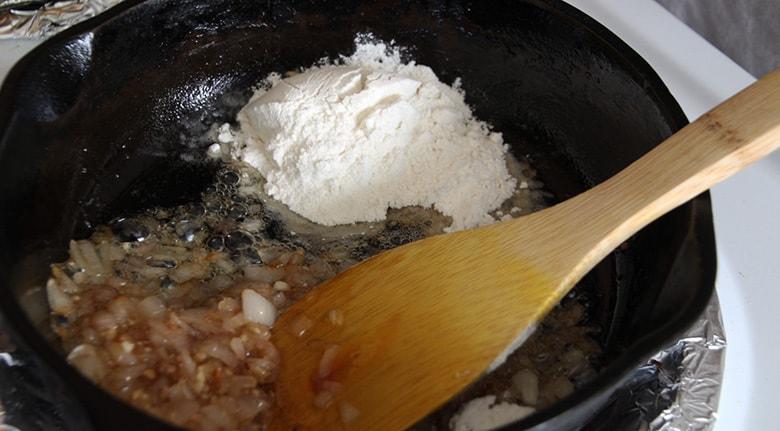 Cook shallots until soft, add garlic and cook for one more minute before adding the flour. 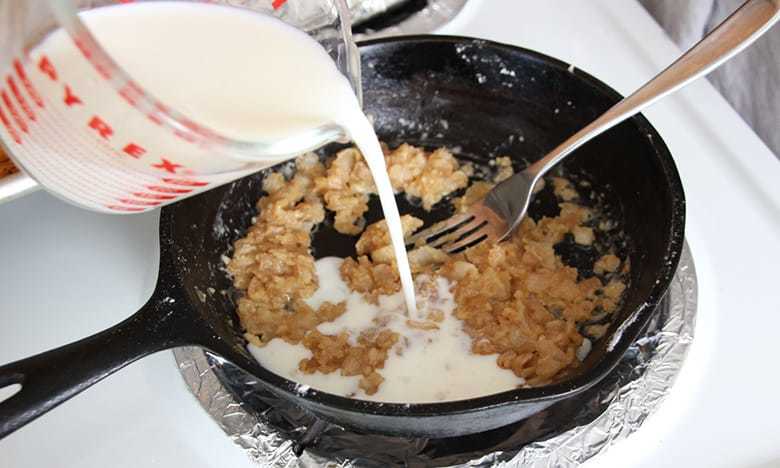 When the flour is golden brown, add milk, beef or chicken stock while stirring continuously. Add salt, pepper and Worchestershire sauce. Cook until the gravy develops the desired thickness. 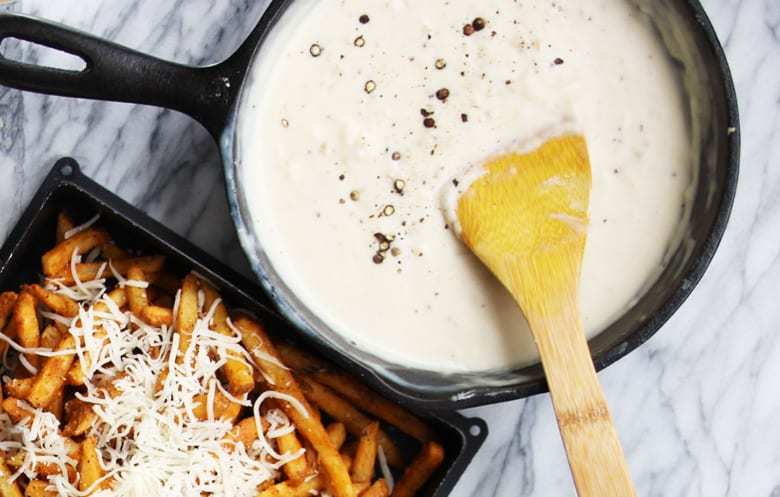 Pour the fries into your serving dish, sprinkle with Mozzarella cheese and cheddar cheese curds and pour gravy over. Serve immediately.

Be sure to read this article on How to Make a Roux.

Did you make this recipe?  Don’t forget to rate the recipe and comment below!  Take a picture and tag us @FusionCraftiness #FusionCraftiness on Instagram for a chance to be featured in our Insta Stories:)

As an Amazon Associate and member of other affiliate programs, I earn from qualifying purchases.

Did you make this recipe?

It's a staple in Canada. Google some Montreal recipes (where it originated) for the authentic thing. A Montreal chef won Iron Chef America in kitchen stadium and his lobster poutine dish was on the menu.

Wow! These look like quite a treat. Definitely not for everyday but once in awhile I deserve something like this. French fries plus gravy plus cheese, sign me up.

HA ha, definitely not for everyday!

How have I never had poutine?! It literally has everything I love in it. I love all of the information you added about poutine too! It will come in handy with my inquisitive husband when I serve this up!

Sweet! Thanks Miranda and hope your hubby enjoys it:)

Wow! These sound like the ultimate comfort food for potatoes! I adore cheese fries but the gravy puts these over the top. And you can get them at McDonalds in Canada, that’s amazing. Definitely making these as an appetizer while we tailgate this weekend.

Oh definitely comfort food. What a great idea for tailgating.

WOW!! Talk about comfort food! My gosh this dish heaven on earth. Crispy fries! Stretchy cheese! And to top it all off some delicious gravy. I wouldn't need or want anything else.