So, you want to know more about Bastille Day?  Well my friends, here are the cliff notes version along with some AMAZING recipes!  I promise:)

What is Bastille Day actually celebrating?

Bastille Day is a French national holiday commemorating the storming of the Bastille at a turning point during the French Revolution in 1789.  It is known as the French National Day (La Fête Nationale) or the 14th of July (Le 14 Juillet). This day also celebrates Festival Of The Federation (Fête de la Fèdèration), which honors the unity of the French people.

The short story is that the commoners were suffering and hungry.  France was fatigued by wars overseas and the wealthy got richer and the poor got hungrier.  The commoners united and with the help of the deputies of the Third Estate (the commoners), formed the National Constituent Assembly which was the springboard for the revolution.

A mob formed and stormed the Bastille which was a French political prison with only 7 inmates at the time.  It was a symbolic raid that included mutinous French guards but also practical since the Bastille held arms and gunpowder.

The first Bastille Day was celebrated over 4 days and included fine wine, food, fireworks and streakers!  Yep, people ran naked down the street to celebrate their new freedom.

The military parade during the celebration is the oldest and largest military parade.  It has been held every year since 1880, mostly on the Champs-Élysées in Paris but was held in England under Charles de Gaulle during Nazi occupation.

How to say Bastille Day in French

This holiday however is known as either 14th of July or French National Day.  So if you want to be French-correct you would say la fête du 14-juillet or la fête nationale.

Now onto the FOOD!!

Celebrate Bastille Day with these 15 recipes 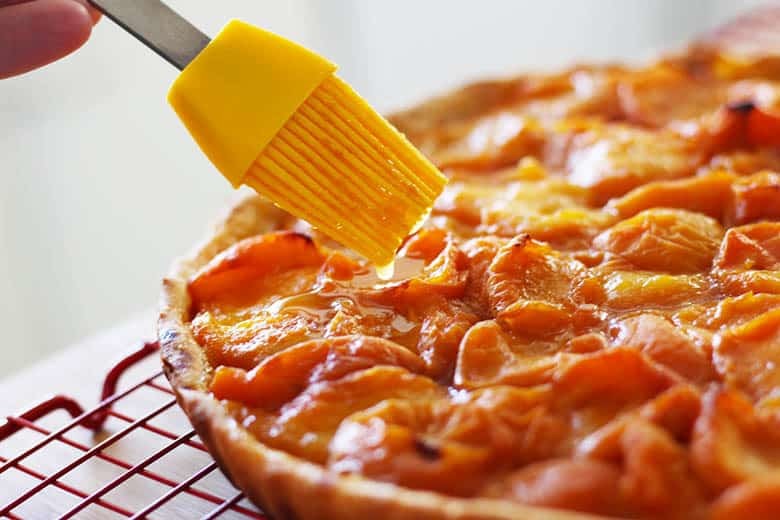 If you have every wanted to learn how to make a French tart, you are in the right place. This post has step-by-step instructions on how to make an apricot French tart including how to make tart dough. You CAN make this! This recipe is easy, simple and authentic. An easy and classic Coq Au Vin recipe prepared similarly to my Boeuf Bourguignon. Lots of wine and few dirty dishes makes a happy home chef. This classic French recipe has carrots, onions and mushrooms added to the chicken and lardons. So this Bastille Day, make some Coq Au Vin for your friends. 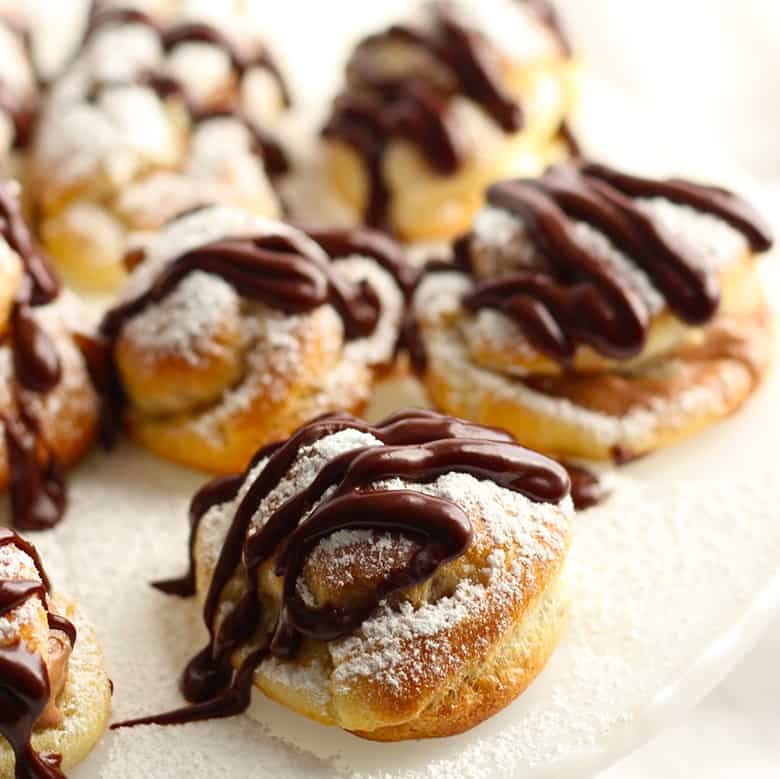 A decadent classic French Pastry known as a profiterole stuffed with Nutella whipped cream and drizzled shamelessly with a chocolate and coffee ganache, oh and there is some powdered sugar action too!  Step-by-step instructions are included:) 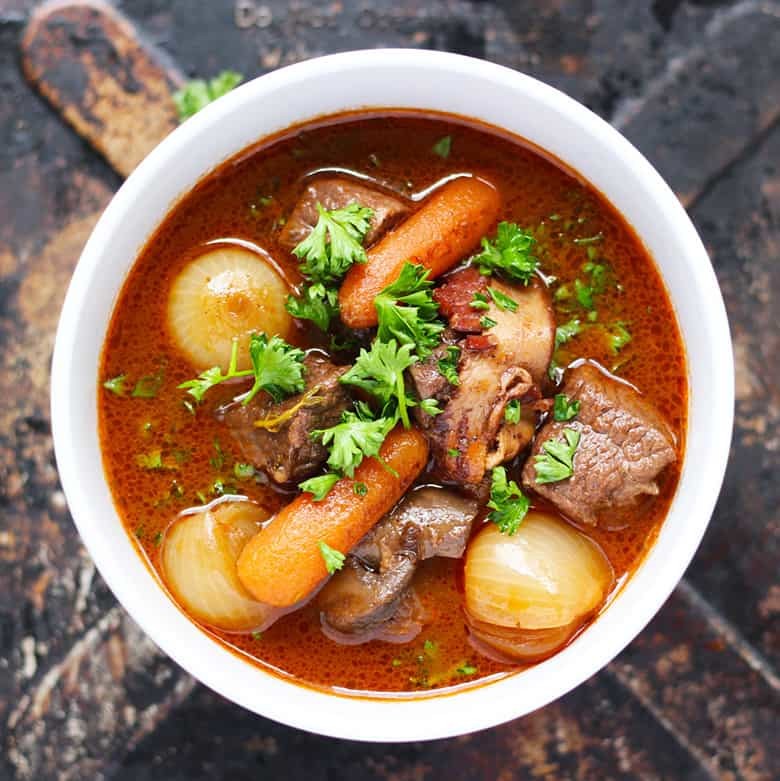 A beautiful French beef stew with multiple levels of flavor and depth. A French classic made easy. Boeuf Bourguignon. 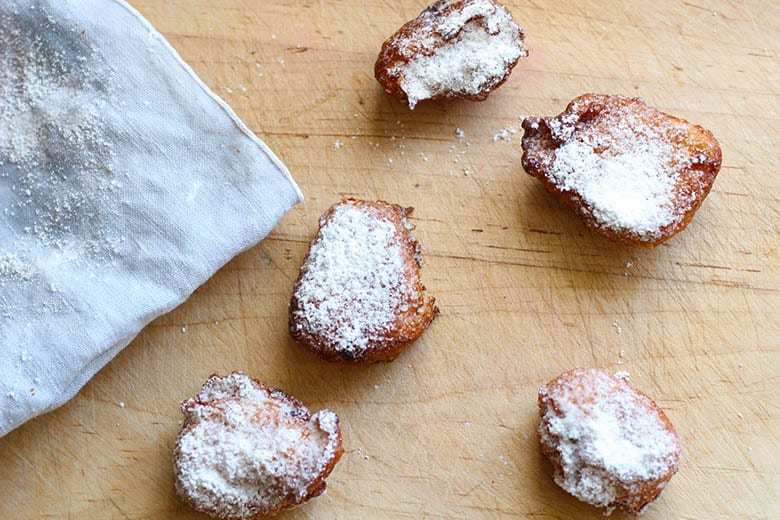 Another French pastry gem made from Pate a Choux.  It’s the little sister of the cream puff.  The dough is easy to make and then is deep fried with a little powdered sugar.  You can’t eat just one, thought I would warn you. 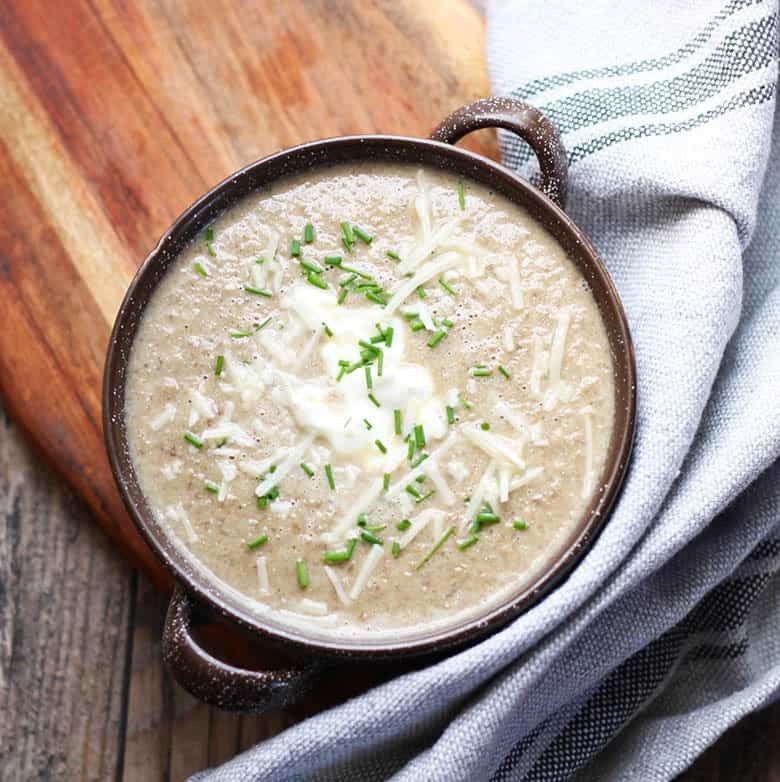 A creamy French Mushroom Soup perfectly seasoned with shallots, sherry, garlic and parmesan. A quick and easy soup for everyday cooking. Weeknight or special occasion, easy and fancy enough for both! 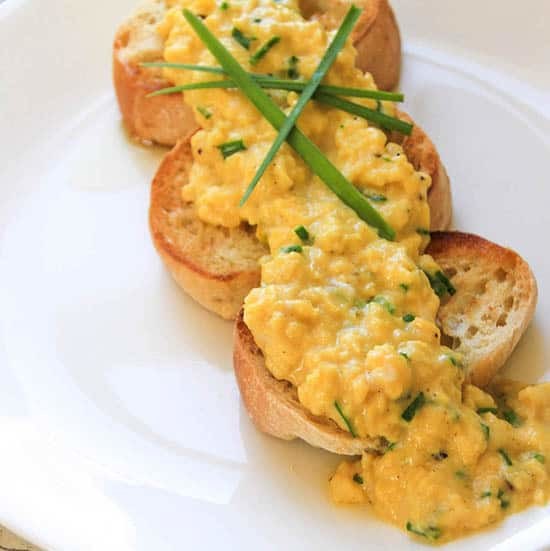 There is more than one way to make scrambled eggs. In Southern France, a simple method is used to make creamy scrambled eggs served over toasted baguette slices. They use cream and chilled butter, of course, cooked over low heat. 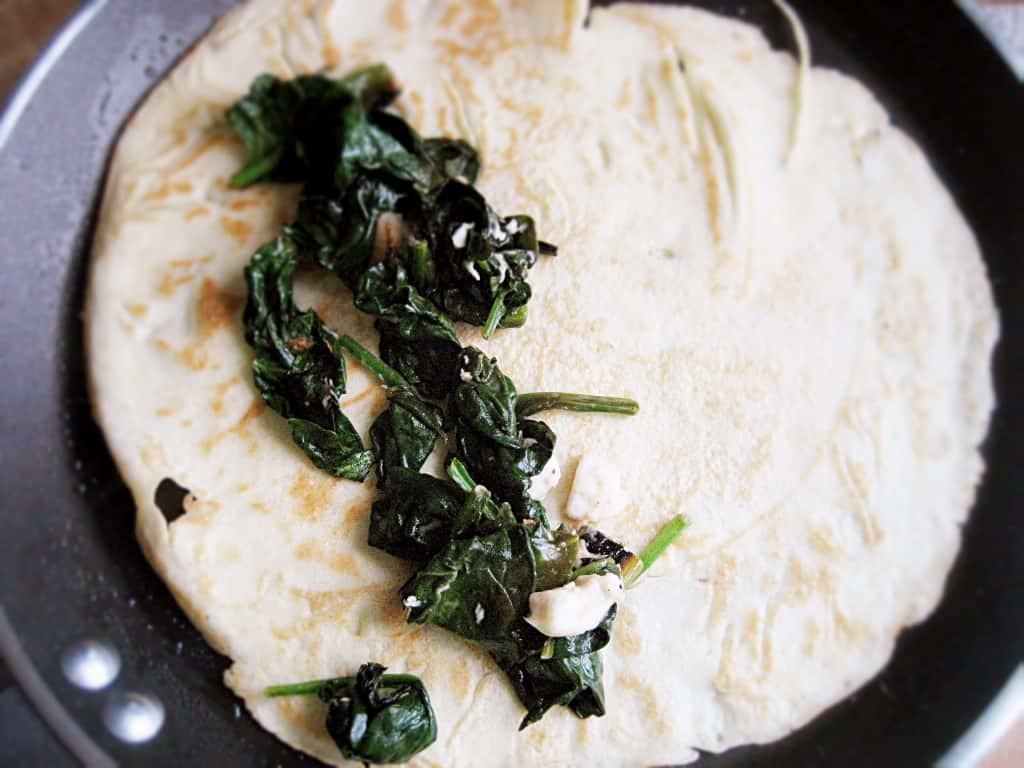 This spinach and feta crepe recipe is versatile in fillings.  Try ham and cheese, bananas and Nutella, creme fraiche and fruit and so on.  Have fun with this one, the batter is as simple as stirring ingredients in a bowl.  This is very portable if you are planning on going for a Bastille Day picnic. 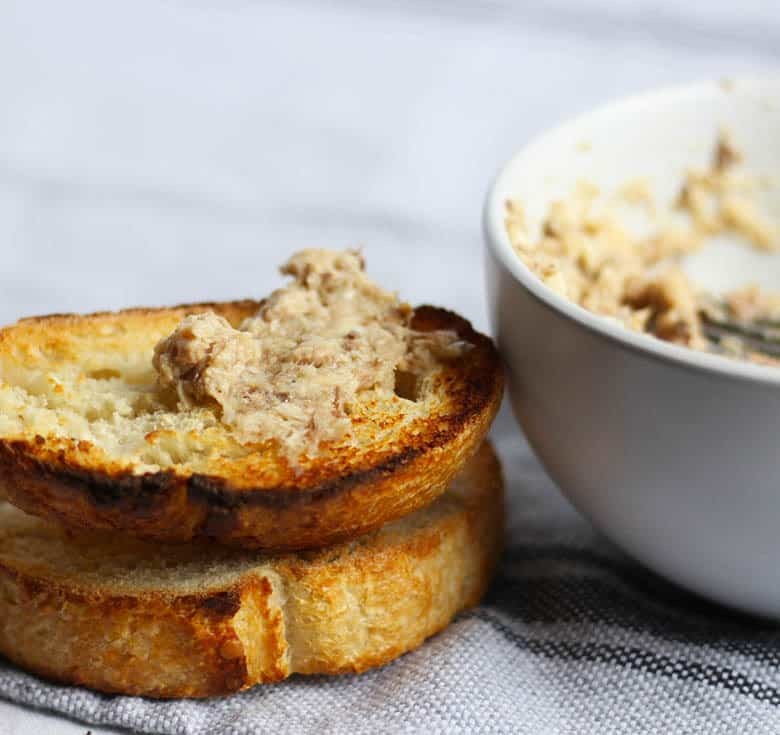 The French’s love of butter really shows in this sardine pate recipe. The sardines make for a surprising rich, creamy spread that is delightful on baguette slices. If you ever wanted to learn how to make a pate, this is for you. 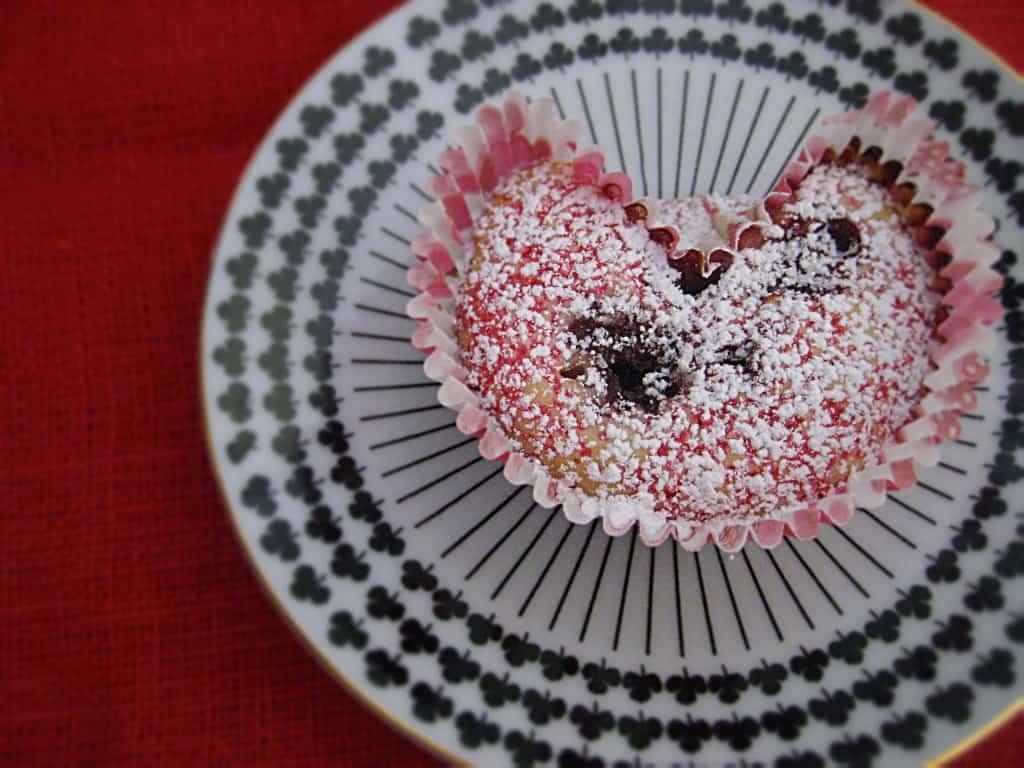 The French Clafoutis transforms into 30 miniature hearts to share with your friends and friend.  I hope you have as much fun making these as I have!  Enjoy! 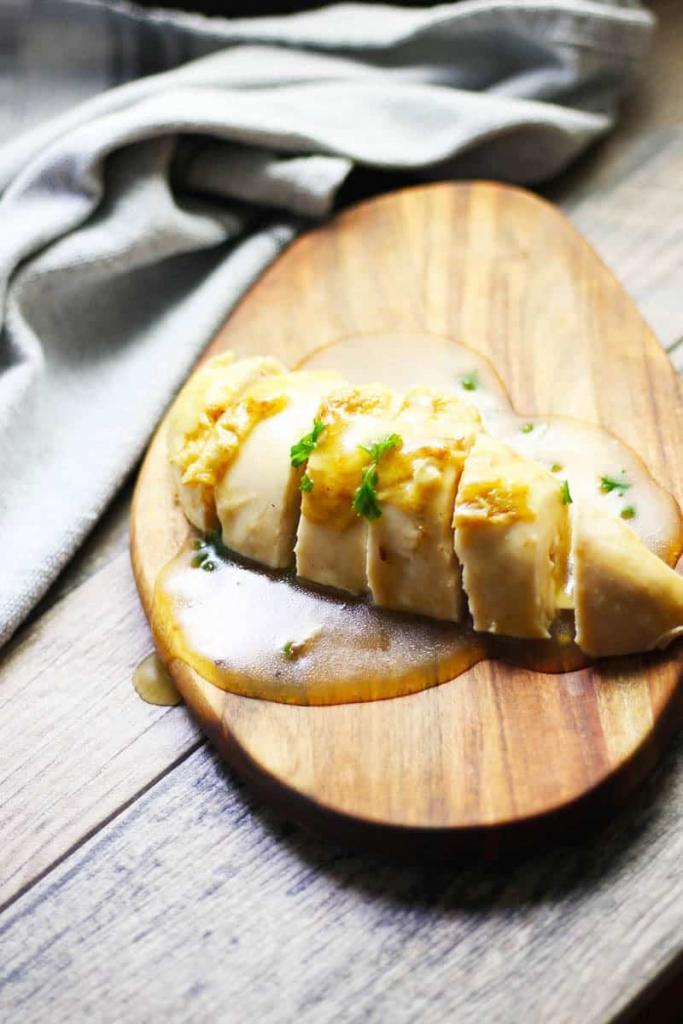 A beautiful, classic, multi-step chicken recipe that is moist, tasty and served with a delightful reduction sauce. The steps themselves are easy and yields an amazing dinner. 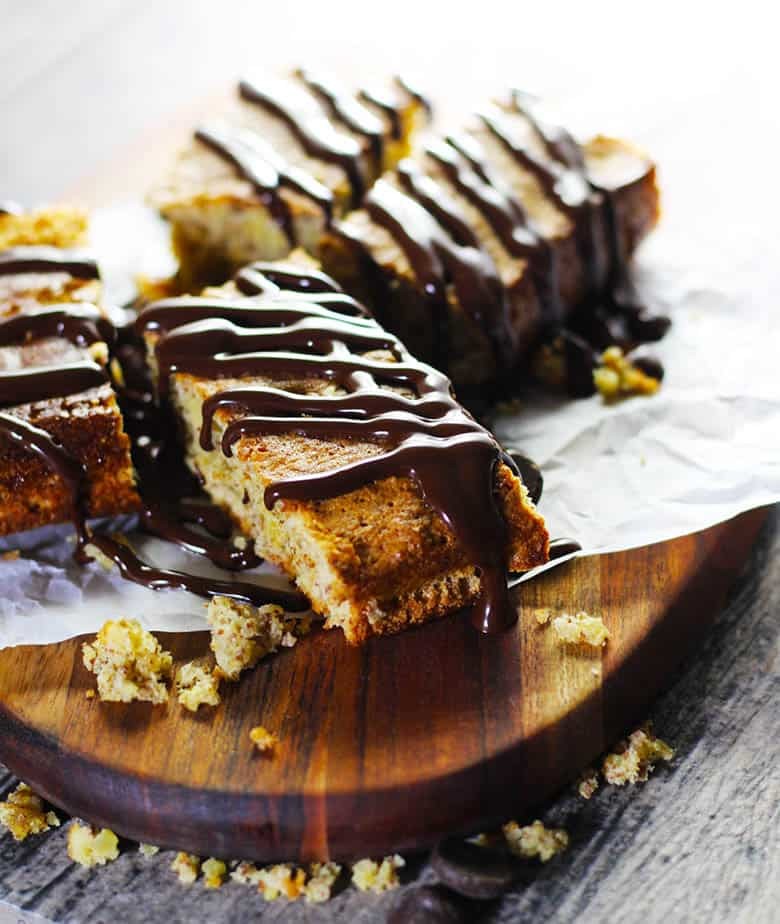 An easy almond biscuit drizzled in chocolate, a French classic adapted from a Eugenie Brazier recipe. 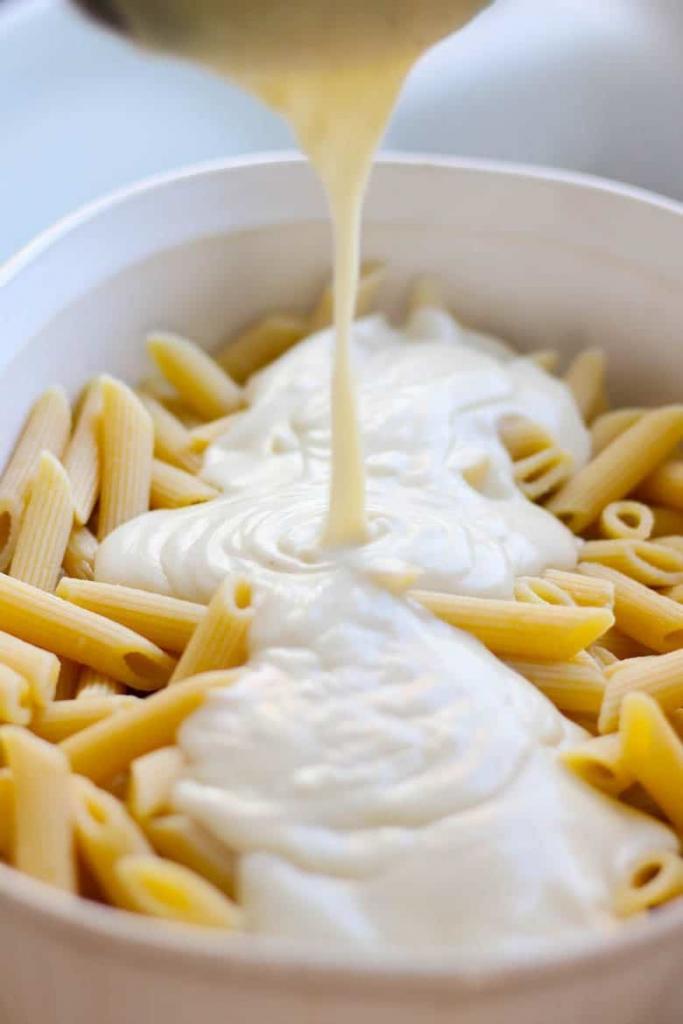 A cheesy, creamy pasta that has become a French, English and American classic, utilizing a classic French white sauce and gruyere, to form a simple yet tasty dish that transcends generations and cultures. 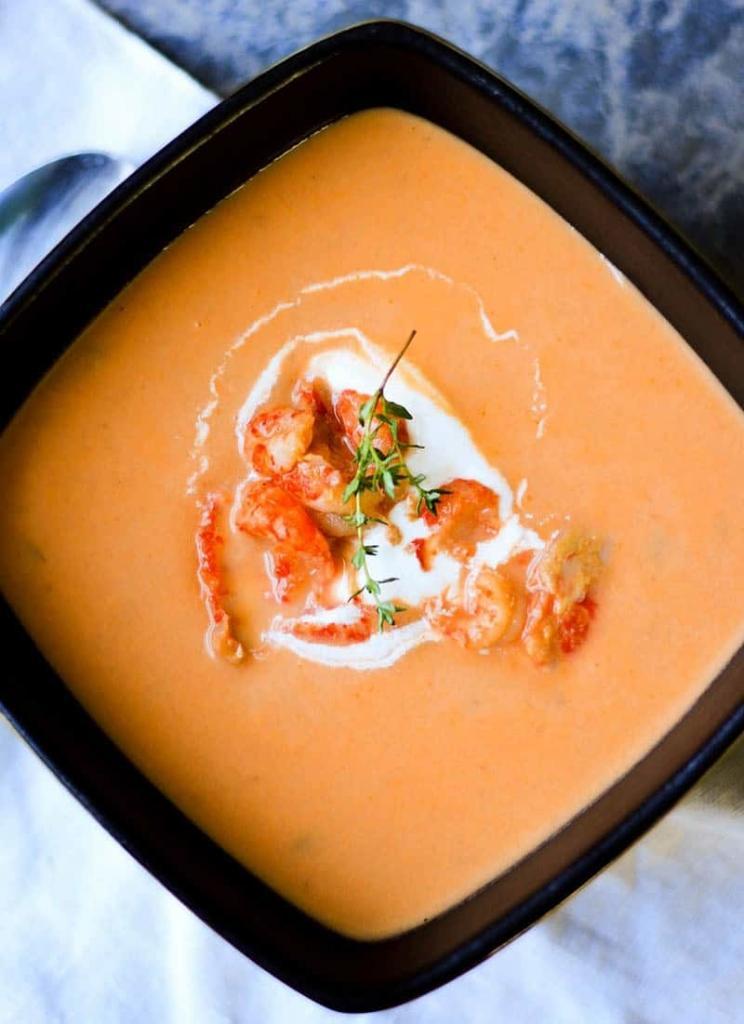 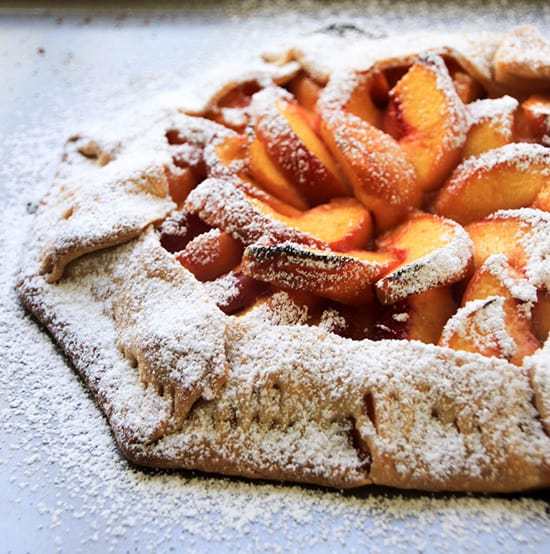 This is a great starter pastry for those budding French home chefs.  If you can roll out a pie dough, you can make this tasty and simple recipe.  It’s great served with coffee and tea.  This is portable too for your French picnic.

What are Bastille Day traditions?

Bastille Day is celebrated in France by the French military parade followed by leisurely feasting all day with friends and fireworks in the evening.  Traditionally feasting is in the form of picnics commemorating the commoners taking to the streets during the Revolution.   People also feast at home as a form of family reunion and by having garden parties.

So, this 14th of July, hang your French flag, watch the French military parade on live stream, eat, be merry and throw up some fireworks (if that is legal in your area).  You can also search for Bastille Day celebrations in your area.  I went to one at the French Legation Museum in Austin, Texas and it was beautiful!

Bastille is pronounced with Bastiy with y sound like in Yolk. Gratin de Macaronis ( s like in english means plural) , we can’t really say it’s a national dish. Presented like in your photo, it looks like Béchamel sauce poured over Penne Rifate. The word «  gratin » means that it’s baked in oven with chrese topping and a creamy and soltiles eggs sauce. Poulet à l’estragon is the right way to spell it. I would recommend a good Souoe à l’oignon ( oignon soup)too and our famius Quiche Lorraine as well. Enjoy !!!

Hi JP, thank you for your suggestions. I haven't made oignon soup in a long time, I will surely make that soon. As for Quiche Lorraine, do you have a favorite recipe? Have you made this? It's funny you say Nutella is not French, I had never heard of it until I visited Paris where it was everywhere. Who brought it to France? Thanks for the correct spelling, here macaroni is both plural and singular. If you click on through you can see where it is baked with gruyere. I am not familiar with a soltiles eggs sauce. That sounds very interesting. I have some more reading to do, thank you so much.

I would eat each and every one of your 15 recipes. They all look so delicious and beautiful! I can't wait to sample them all. (I'm glad I've been pronouncing Bastille correctly) ;)

Me too Elaine:) Have you ever tried 'Answer The Public'? Apparently 'How do you pronounce Bastille Day in French' is a common question.

The photo you are showing as "boeuf bourgignon" is actually pot-au-feu, beef stewed in a broth. Boeuf Bourgignon is cooked in a thickened, wine-flavored sauce that has tiny pearl onions and sliced mushrooms.

Thanks Gigi! Pot-au-feu sounds delicious too! I have been wanting to try it since watching Luke Nguyens France:)